Join author and illustrator Alan Nolan as he talks about favourite animals from children’s books, and introduces you to a host of crazy critters, big and small, from his latest book Sam Hannigan and the Last Dodo as well as his upcoming book Animal Crackers with Sarah Webb.

Learn how to detect which animal leaves which paw print, learn how to draw a dodo, and play along with Alan’s ultra exciting, eco-friendly game show Alive, Extinct or Just Plain Stinky!

Alan Nolan is the author and illustrator of Fintan’s Fifteen, Conor’s Caveman and the Sam Hannigan series for the O’Brien Press. His latest book, Sam Hannigan and the Last Dodo, is out now, and Animal Crackers (with Sarah Webb) will be released into the wild in August. Alan lives in Bray, County Wicklow with his wife, three sons and a cat called Chewie.

Places are limited. Please book below. Before the event, you will be emailed a link to access, instructions you might need, along with notifications when the event is going live. 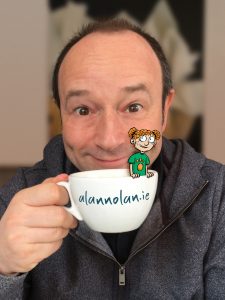